Rise of the Berlin Wall : this week on a Sunday as it was 56 years ago

Last year on the anniversary date of the erection of the Berlin Wall, I had shared some articles and photos of the first days that saw the Cold War rigify into a durable, inflexible and shameful symbol of Europe´s division of ideas and dominances. I have reposted them at the end of this post for those of you who have missed them in the infancy of the website, when the book was still a draft with scribbled corrections, and few cat paw prints, on my desk.

As you know, Aquilis Serenade´story, released a little less than a month ago, is centred around major historical events, including a wall built hastily in Berlin, as its cover announces. 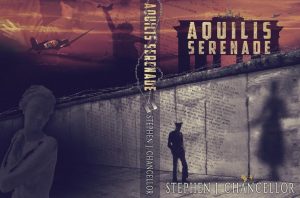 This week will be 56 years since it was decided that a wall would split the old capital (at the time and for many years to come) and its people. This year (and we may, why not, allow ourselves to believe, even for an instant, that it may not be a mere coincidence but a chronological wink of encouragement, a nudge of fate, to the publication of “Aquilis Serenade”), the calendar matches the days of the year 1961.

As some of the protagonists, you may find yourself imagining that, this weekend, you are waking on a Sunday, as some Berliners did 56 years back, to a physically closed border where only cobbled streets existed the preceding evening.

I sincerely hope that many of you will meet the related pages on the anniversary date and, especially, on the fortuitous evening and morning that have given a face to the dissension that tore Europe and more widely the world for nearly 30 years.

For the most adventurous and fortunate readers or readers-to-be, for now visitors and lovers of Berlin, I wish you the chance to walk in the footsteps of some of Aquilis Serenade´s characters on the strasse des 17 Juni, heading eastward on the vast and wide avenue, quiet on the early summer morning, bordered by luxuriant woods, facing the rising sun across the wreath of the quadriga of the Brandenburg Tor. Then, you may say that you have experienced a true dive into the book “Aquilis Serenade”.

Article reposted and available in the blog section of my website at www.stephenchancellor.com