American Eagles in the RAF: Introduction

Who were the Eagles in Aquilis Serenade?

A short description in episodes of remarkable men, uncommon Americans, and their tale of exceptional and unconventional sacrifice.

Should I begin by telling you why I decided to release a succinct biography of this group of pilots today, beyond the purpose of situating the background of one of the main protagonists of my book “Aquilis Serenade”? And why now?

This story takes us to a date, the 29th of September. It was 75 years ago that the original RAF-borne American Eagles were transferred to the US Air Forces in a reversal that you will come to appreciate if you choose to follow the next chapters of their story. You may even find somehow ironic what happened on this date of 1942, once you have read more about their unique journey into the fires of a war which was not theirs, not quite yet at least.

You may have heard the terms “Band of Brothers”, possibly in the context of a TV series inspired by the book of the same name by Stephen Ambrose. Very early on, well before the paratroopers described by the aforementioned author, there was such a band of improbable brothers but such men were not drafted or enlisted warriors in the traditional sense. They were not militaries, not prepared, minimally trained, although admittedly some had served at some point of their lives.

This unusual bunch were aviators who came together from various horizons. They made the Eagle squadrons of the RAF. 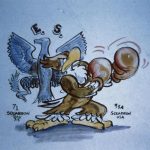 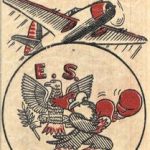 So what made them so special? What are the reasons why I chose them, amongst all heroes of the last world war, to kick off the story of “Aquilis Serenade,” aside from a certain required logic in the selection of the actors of the divided Berlin?

Did they do anything particular? What made them so different from their contemporaries?

Well, even if war is by far the last place where one should make any comparison of courage and devotion, the truth is that it was for both motives. What I am about to describe in the coming days, until we reach the date of September 29th, is their early story, how they came to be, sometimes why, and what set them apart.

I propose to describe here in a series of short articles what led to their adventure, their commitment and some of their exploits, the greatest one having been perhaps to leave it all behind, including their rights and citizenship to protect the shores of England, last bastion to oppose effectively the regime of the German 3rd Reich.

But, let´s come back a minute to what I was about to tell you on the reasons that have motivated me to select this group for one of my protagonists. Generally, what has attracted me was that little is told about them. But when one learns of their engagement, he or she can help but growing curious of their singularity.

So what, in few words, truly differentiated this group of airmen?

First, they were the first Americans to fight, were not coming from any armed force but from quiet settled and comfortable lives. And they became outlaws for their sacrifice.

Second, they did not fight for their country. They would wear the colours and badges of a kingdom that was not theirs. They were neither mercenaries nor part of some expeditionary force. They were simply volunteers of the first hours, ready to do anything to fly and fight, even if it meant risking their lives. 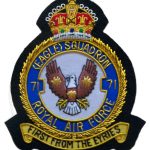 Third, they were civilian volunteers. They did not always come from jobs related to the civil or private aviation. There had in their ranks characters such as taxi drivers, radio hosts, artists, etc… Many of them were no longer of the expected younger recruiting age. But most British officers agreed, they were a strange lot of mavericks. They were loud, rude and rugged. Men with incomprehensible different accents and little discipline. They were primitive, eager and rowdy cowboys in the land of gentlemen officers. (A little more but these improvised fighter pilots here:  http://www.dailymail.co.uk/news/article-3109647/The-Americans-fight-Nazis-revealed-unlikely-band-including-taxi-driver-make-artist-risked-arrest-authorities-join-Britain-s-air-force-1939-end-150-years-frosty-relations.html)

Fourth, no-one pushed them, paid them nor encouraged them to join the fight. Quite the contrary. In fact, they were deterred from enrolling in the early fighting forces. They were considered criminals, by the principles of law, and stripped of their citizenship.

Fifth and finally, few people have heard or can tell much about them. Yet, they were men who, against the loss of all their privileges, such as their citizenship or all of their comforts and security, and most of them without military training, joined the air battles over Northern Europe before any of their compatriots.

In fact, their start was so poor that, for the first of them who reached Britain to strengthen the thinning ranks of the RAF, no planes, nor officers nor orders had been made available. They literally built themselves from little or nothing, sometimes from charitable donations, for the sole intention of fighting the Nazis, regardless of the oppositions and hurdles.

And when the world grew peaceful again, when they went home, it took 40 years to find a monument erected to the memory of the 289 men (of which 71 perished, a quarter, not counting the wounded and PoW) who had composed the three original Eagle squadrons of world war II. The memorial, predictably financed by private donations, now stands, crowned by an eagle taking flight, across from the old US Embassy in London, in Grosvenor square. 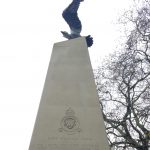 PS: A previous article, published in december 2016, treated of the Eagle squadron from a different angle, in relation to the event of the bombing of Pearl Harbor. It is available on my website under the title : The Eagles who came before the “Day of Infamy”